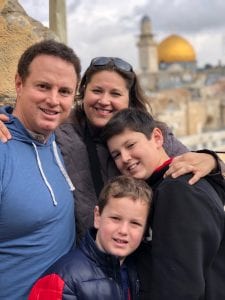 How old are your kids and how long have you lived in Westport? My son Jonathan is 13, and William is 7! We moved to Westport three years ago from my hometown of New York. I’m a born-and-raised Upper East Sider! But after 40 years, I had had enough of full-time city life.
How did you end up where you are now in terms of your job, or whatever passion project it is you might be doing? It definitely was not a straight line! I began my career on Wall Street doing Corporate Communications for Prudential Securities, Goldman Sachs, and Société Générale. But my now-husband-then-boyfriend urged me to consider a culinary career because I was a naturally good cook spending all my disposable income entertaining friends. I realized that there was little downside to giving it a shot and going to culinary school; it would be nice to get paid to entertain! I went to the International Culinary Center (formerly The French Culinary Institute) and never looked back!
The day I graduated, I checked in with the job placement office and learned that Michel Nischan (founder of the Westport Farmer’s Market, as it happens) needed assistance at a media event. It is a longer and funny story, but that launched my food styling career. I worked in live TV as food stylist for years all the while running my catering/private chef business, Gotham Caterers, and teaching cooking privately and at the JCC of Manhattan and Rainbeau Ridge Farm in Bedford Hills. I got my first break appearing on TV early in my culinary career when a friend who was a producer at NBC’s Today in New York (and is now my social media consultant) needed a chef to appear on air Thanksgiving morning. I appeared on that show more than a dozen times. I got my own show, Pantry Challenge, on AOL because I was styling for Top Chef’s Gail Simmons and those producers liked what they saw in me. I had a 45-eposide series with 5 million unique views. It was a lot of fun! While that was happening, I ended up getting two book deals at once (one was from one of my JCC students!), and then I ended up doing a third book, a children’s book, with a fellow Colgate alumna next to whom I was sitting at a reunion book signing. I was offered the opportunity to have a national TV show right before I gave birth to my second son, but it became clear to me you really cannot have it all…at least not all at the same time! Now, after the better part of a decade away from the camera and the classroom, I’m back at it! 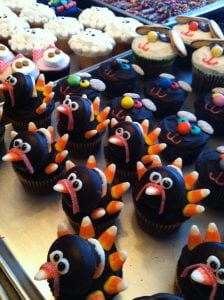 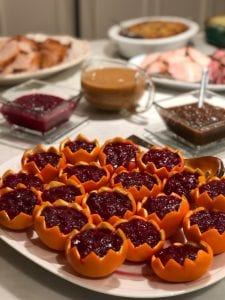 What is your favorite family activity to do in Westport or the surrounding towns? We LOVE zipping around the Long Island Sound in our new boat, going to the Westport Farmer’s market (as a family only for a few weeks in late June and late August and then on the weekends in the winter), and dining out all over the county. I could go on and on and on about all the restaurants we love!

What’s your favorite app right now- for you- and for your kids? Waze and OpenTable, of course, and Planoly for me! For my kids, ESPN.
What’s your can’t-live-without beauty product? Lip gloss, mascara, and Neutrogena wipes to take it off!
If you could pick one restaurant or store to come to Westport that isn’t here now, what would it be, and why? Maison Kayser: I would love a bounty of fresh croissants, baguettes, boules, and brioches!
What are you most excited about in life right now? Getting back to work with the launch of It’s Lauren, of Course!, getting back to my creativity and sharing it with others. I never stopped the cooking and creativity, but the potential of sharing it with the world is a renewed privilege and a joy!
What is one thing people would be surprised to know about you? I’m a born-and-raised lifelong New Yorker until age 40, but I did have a brief hiatus living in Wichita, KS from age 2 to shy of age 8.
If you weren’t doing what you are today, what do you think your career path might have been? I suppose I would have continued up the ladder in financial corporate communications for a while until my eldest was born. Honestly, though, it is hard to imagine me not cooking, writing, teaching, talking, entertaining, and sharing. It’s all I do anyway!
If you had 24 hours to do whatever you wanted – what would you do? Sit and read. Walk and talk. Eat and drink. No cell phone, but maybe a little TV. And it would have to be “elsewhere.” I find that none of this is possible at home!
What is your most marked characteristic? Personality: my wit/sense of humor/unabashed outspokenness/generosity/intelligence. Physically: probably my weight, tragically (way back when it was my legs!)
What was your most memorable family vacation and why? This past winter we spent two weeks in Israel with a start in Amsterdam at Anne Frank’s house, and a several-day finish in Paris. The Israel part was with our New York temple and it was such a special experience. But I hope we are just getting started with major memorable family vacations!
What is the best white lie you have told your kids? I am stumped! And I am not happy that I am stumped! I really believe in white lies…they make the world go ‘round. Lies—full-blown lies—on the other hand, I just don’t do. Not my thing. This is not an answer to your question, I realize, and I will continue to think about it and try to recall one I have told them. For now I will say that my all-time favorite grown-up Halloween costume is White Lies: dress in all white and print on Avery labels a bunch of white lies you slap on your outfit (“Oh, I wish I could but I already have plans” . . . “You don’t look a day over 40” . . . “This is so delicious, but I’m just too full to take another bite” and so on).
What is your proudest mommy moment? Hearing that my sons are so polite and bright when they return/are picked up from play dates/sleepovers. My only job is to make them good people who know how to relate to others, so getting this affirmation is everything and more!
What do you most value in your friends? Loyalty, thoughtfulness, intelligence, kindness, humor, and curiosity.
What is your greatest regret? I always wanted to publish a cookbook called “Cooking with Grandpa Ted,” a Jewish cookbook of traditional recipes that I uncharacteristically learned from my grandfather. He taught me how to make gefilte fish, tzimmes, chopped liver, kasha varnishkes, kishkes, and the list goes on. Most people these days don’t learn how to do this at all, and if so, from their grandmothers. I can picture the book cover: white background, the two of us leaning into one another back-to-back smiling, I in my pink chef’s coat, he in a three-piece bespoke suit and bowtie. But he passed away a decade ago, and I should have started it 15 years ago. It would have been wonderful.