Meet Courtney (get ready to laugh)! 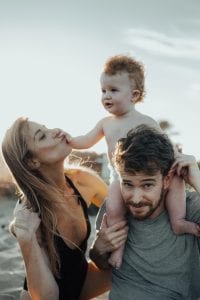 How old are your kids and how long have you lived in Westport? I have a 2 year old boy and I have a girl on the way—it seems like it’s been inside me growing for 1000 years! We’ve been in Westport for about 3 years after moving from Manhattan.

How did you end up where you are now in terms of your job, or whatever passion project it is you might be doing? I am a stand up comic and ended up trying comedy after an acting teacher in LA saw my ‘monologue’ and told me it sounded more like a comedy routine than anything else. When I was little, I really wanted to be a clown, but my mom wanted me to be more of a debutante…so now I’m kind of a ‘debutante clown.’  Half my life I feel is being a mom in the suburbs, and half my life is going to seedy underground comedy clubs. It’s very confusing! I also host a radio show where I give dating advice on Star 99.9 called “Courting with Courtney”.

What was your best memory from 2020, a strange year we know…My husband and I basically giving up the idea of looking hot for each other. It’s so much easier when you just give up! But actually, we also realized we could spend half the year in Florida, where he runs hotels, so that was a big bonus realization for me…if you are ever in Palm Beach, let me know if you ever want to check out The Brazilian Court Hotel or The Ambassador Hotel!

What are you most looking forward to in 2021? Having a drink at a bar! Not being pregnant.  And Doing stand up for Homes with Hope (buy tickets HERE for their June 12th Comedy Show fundraiser!!)—an incredible non-profit that provides food and shelter for the homeless right here in Westport.

What is the best show you have recently (binge) watched?  This is really sad/embarassing…but my husband and I are addicted to this show on MTV called “Are you the One?” We even go as far to look these people up on social media to see what their dating lives are like after the show.  It’s 20 year olds who are put in a house together and trying to find love (but basically just hooking up.) We live vicariously through them.

What’s your favorite app right now- for you- and for your kids? Dorsal! It’s an app for finding where sharks are around the world.  I have to admit, my kid doesn’t use apps yet so this one is totally for me.

What is one food you could not live without? Bean and cheese burritos! I make them basically every night.   One time, I split my knee open and got 30 stitches, but before they started operating I asked if I could grab a bean and cheese burrito from Taco Bell. Priorities!

What was your most memorable family vacation and why? We went to a place in Utah called Amangiri that looked like Mars and it was amazing.  Even though they had a very gourmet menu, I’m a vegetarian and I ended up ordering peanut butter and jelly sandwiches everyday. They were SO GOOD. 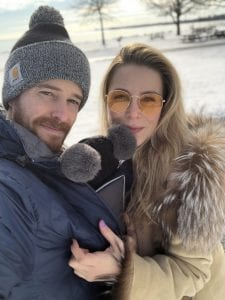 What is the best white lie you have told your kids? My son and I were looking at a magazine together, and we saw a picture of Margot Robbie, and I told him it was me to make myself feel better.  It worked for about 3 seconds.

Are you a morning person, or a night owl? How does sleep fit into your life right now? I’m definitely a night person.  The whole reason I got a nanny was so I could sleep in. Although I realized after being a mom, I feel like I want to be there when my kid wakes up and say hi—it’s horrible! Mom guilt is so real.

What thing has surprised you most about being in the suburbs? The people here party harder than my city friends!  It’s so much fun going out here…I feel like being parents has brought out the crazy in people and I think that’s a wonderful thing.  Even though we haven’t really done that in a year, I’m excited to go back to Westport bar hopping…

QUICK THIS OR THAT:

Cake or Pie? Cake! Vegan Cake.
At a movie: Candy or Popcorn? I would say both but If I have to choose I would say Candy-Sour Patch Kids. I detest people who put “extra butter” on their popcorn.  Pretty sure my husband did that on one of our first dates.
Pancakes or Waffles? I make vegan pancakes almost every day—they’re horrible but I add a lot of chocolate chips and it makes them almost edible!
Iced Coffee or Hot Coffee? Hot coffee in the morning—I love it so much.
Beach or Mountains? Beach.
Puzzle or Board Game? Puzzle..I think? This was a stressful question.
Chocolate or vanilla? Chocolate
Reading or writing? Writing.
Ketchup or mustard? Mustard! Love mustard.
Watch or play sports? Eek. I’m exhausted reading this.
Winter or summer?  Summer-come on. Has anyone picked winter? They should be ousted from this community.
Comedy or Drama? I surprisingly like drama even though I’m a comedian. I should probably talk to my therapist about that. 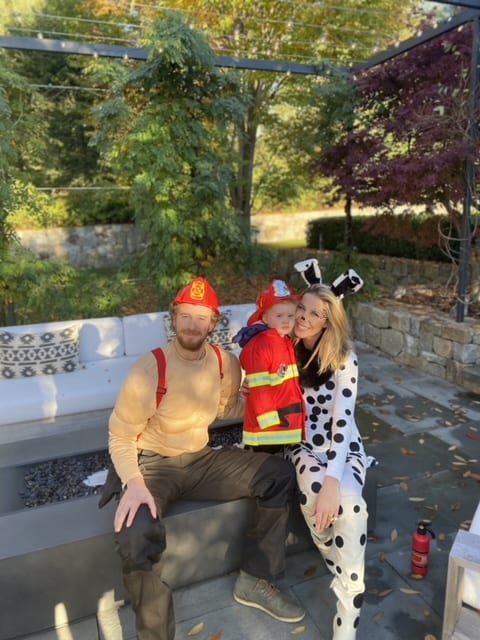