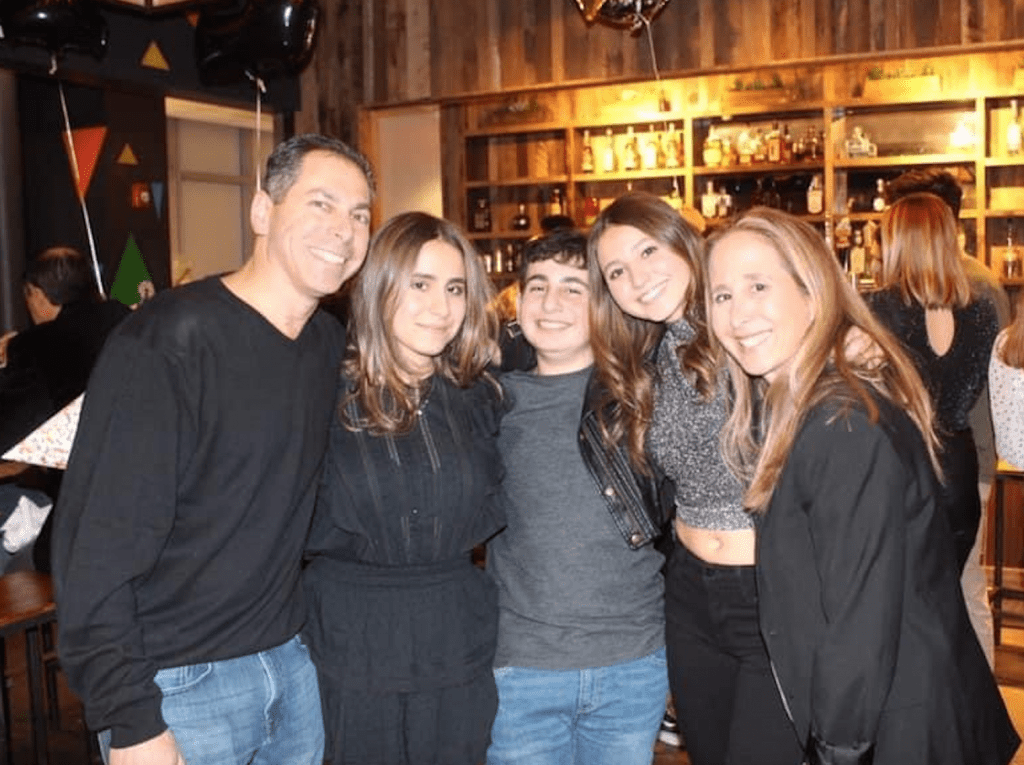 October is Breast Cancer Awareness month, so we are interrupting our regular “meet a mom” interviews to feature a local mom (and celebrity!) in town – Corri Neckritz – the owner of Groove store for kids and women, and hear in her words her very powerful story relating to breast cancer.

M&M: Tell us a little bit about your family history, and how you first found out you had breast cancer?

Corri: My father’s mother passed away at 54 from breast cancer. It was explained to me that she never sought treatment for it, and that I really did not need to worry about it.  For some reason, that explanation never sat well with me and I was always concerned that I too would get breast cancer. I tested for the BRCA gene at about 40 years old, and my tests came back negative. In the fall of 2019, my doctor mentioned that there was now a more advanced genetic panel.  I didn’t need any encouragement to take the new test, and I got tested in December.

We had a family trip planned to Europe and I decided I did not want my results back until after we returned in January.  My tests showed that I had a mutation of the Chek2 gene.  These mutations have been linked to an increased risk for breast and colorectal cancer, but because these risks are not well defined the variant is known as a Variant of Unknown Significance (VUS). I truly thought it was not significant and nothing to worry about.  Then Covid … I had a mammogram ultrasound scheduled for the Spring of 2020 but deferred until the summer.  My ultrasound results came back fine, so again, I felt relief. In the Fall, I had a follow-up appointment with my doctor and she recommended an MRI due to the VUS of Chek2.  I still thought the VUS was insignificant and didn’t give much thought to getting the MRI as I was always one to get another test to be sure.  The MRI revealed a small mass in my left breast and a fluid pocket in my right breast.  The biopsy of the mass in my left breast came back positive but the right breast biopsy was negative.  On December 16th, while at work, I got the phone call no one wants to get, “Corri, are you free to talk…..you have cancer.”

M&M: What did your journey from there on look like? Is there anything you learned from the process that you would recommend to others?

Corri: To say this was a tough year is an understatement.  I consulted with several doctors and many friends, and decided to have a double mastectomy.  A lumpectomy was an option, but I feared the ongoing testing and greater uncertainty of not doing all I could to prevent a recurrence.  I recently finished my reconstructive surgery and have had time to reflect back on this journey.  At the beginning of the process I was always looking for the “right” answer….Some reassurance from a friend or a doctor of what I should do.  What I came to realize is that there is no right answer for cancer.  Everyone needs to make the decision that works best for them. It sounds cliche, but the best advice I received was that I needed to do what would allow me to sleep at night.  I have learned a lot and I had excellent support from my family, friends and doctors. I really had a hard time sharing at the beginning, but now I feel I have to share to help every woman I meet become a little more educated and take the precautionary steps to prevent or detect cancer as early as possible.

After I was diagnosed, I asked both of my sisters and parents to get genetically tested.  My older sister had a clean MRI, which we were so happy about, but two weeks later her genetic tests came back revealing that she was BRCA positive and had a VUS of Chek2.  My younger sister was also BRCA positive so she consulted with a doctor about a prophylactic double mastectomy.  Unfortunately her situation was the worst of the three of us.  A lump was found in her right breast and she was diagnosed with triple negative breast cancer.  She’s just finished her chemotherapy treatments and is waiting to find out what her next step is.  Last to test was my father, who also tested positive for BRCA and Chek2.  While my father had no signs of breast cancer, which is rare but does happen in men, he has prostate cancer.  Cancer has obviously become a very big part of my and my family’s life.  While I never wanted to get cancer, I feel my cancer provided the opportunity for me to help my sisters and my father live longer, healthier lives.

October is Breast Cancer Awareness month.  I hope my story encourages every woman who reads this to be proactive and to get genetic and physical testing . . . I’m here if you need me.